Tomorrow is the first day of classes.

I’ve been teaching for a decade now and I still get excited for the start of a new semester.

I tweak my syllabi, update my slides, search out new readings to assign, and wonder what my students will be like.  I prepare all my materials the night before, certain (and rightly so) that I’ve forgotten something.  I toss and turn, playing out my “welcome to the class” speech in my head all night long.  I laugh nervously at my mistakes as I stand before a sea of faces and flounder through 80 new, unfamiliar names.  I buzz with adrenaline the whole time I’m in the classroom and smile at strangers on the subway ride home.  I am alive.

I figure the day I no longer feel these things on the first day of classes – a day of infinite promise and possibility – is the day I should find a new job.

In the meantime, I count myself very lucky.

I need your help naming a virus.

The book I’m currently outlining revolves around a viral epidemic and I’m struggling to come up with an awesome name for it.

From my research, it appears that virus names come from all sorts of places, including the geographic locations where they’re first spotted (Lassa virus, first identified in a nurse in Lassa, Nigeria), the individuals who study them (Epstein-Barr virus, a herpes virus named after Michael Epstein and Yvonne Barr, who identified and documented it), the family or type of virus to which they belong (BSE, which causes Mad Cow: bovine spongiform encephalitis), or a from a description of their effects on the body (HIV: Human Immunodeficiency Virus).  Sometimes other factors play into the name; when Hanta virus was first identified it was called Sin Nombre (without name).

I don’t want to say too much, as this project is Top Secret, but for my book I’m developing a retrovirus (similar to HIV) that spreads via infected blood cells and (literally) causes an internal transformation within the host.  Right now I’m calling it Kinshasa Viral Metamorphosis (KVM), but I’m not sure I really love this name (nor am I wedded to the viral origin being the Democratic Republic of Congo).

All I care about is having at least some combination of the following:

2. a name that lends itself to a nickname for the infected (here’s where I worry my current name breaks down; the only nickname I can think of of is “shasies”, which I fear is lame).

3. a name that implies the victims are changed in a fundamental way

4. a name that alludes to the fact that – beyond its general class (retrovirus) and its spreading mechanism (blood-borne) – the virus is poorly understood

So, here’s where you can help.  I need an awesome virus name with an equally awesome nickname for the infected.  There are many details I haven’t settled on yet (including the names of the people who documented the virus or where it originated), so feel free to use the comments to propose any and all ideas that come to mind.

Please, and thank you!

But that’s not really right, is it?  As with most things, these aren’t the only camps, just the loudest ones.  I mean, much as we humans love to put things in boxes, to make them clear-cut and easy to align ourselves with, real life is almost always a grey area.

The grey area I’m struggling with right now is the one between inspiration (“let your muse guide you”) and perspiration (“gut it out”).

Some people say they can only write by the light of a full moon, or in nothing but their underwear, or just on the 3rd Thursday of the month, or only at midnight with bonbons and booze.  It’s that “I’m an artiste through whom the ideas flow from on high” mentality; or, more simply put, the idea that you can’t force things.

On the other side of the scale are those who promote the philosophy of “butt in seat, fingers on the keyboard” every day, whether inspiration strikes or not.  But I challenge any of you to claim that you *really* and *truly* follow either of these practices.  Most of us fall somewhere in between, trying to capture fleeting moments of inspired imagination and corral them into our offices, out of our fingers, and onto the page.

How do we block out the mundane world – the honking horns on the street, the toilets that need to be cleaned, the siren call of the television, the need to go exercise, or a million other things clamoring for our attention – and make space for the fanciful worlds we’re struggling to create and the imaginary friends who occupy them?  Where is the line between being moved and excited about what we’re writing and laboring to hit a certain word count?  How do we balance the inspiration and the perspiration?

This morning, in that muzzy place between sleeping and waking, unwritten scenes from my novel played out in my mind.  The characters were vivid, the drama enthralling.  By the time I woke, though, they’d turned to smoke.  I chased them down the hall, trying to grasp their vapor, but by the time I had my tea and was sitting in front of my computer, they were gone.  I felt bereft, at a loss.

Ah well, so much for inspiration today.  Time to gut it out.

What I’m working on:  I’ve got two projects going right now.  The first is development for a new book I want to start drafting.  It involves an epidemic, so I’ve been working on building an epidemiological model for the virus.  This has been a fun confluence of research, imagination, and ick-factor.  In the meantime, I’m continuing with revisions to the second draft of my archaeological time travel novel, ABSENT.  I’ve made it about 1/3 of the way into the novel and my characters are currently marooned in Ice Age Wyoming.

Snippet from the screen: “Nick was crouched at the edge of the group, his gaze shifting across the barren, grey landscape.  He looked as if he felt slightly ill.  Emily didn’t blame him.  It was one thing to speculate about traveling through time, but quite another to actually find yourself 11,000 years in the past freezing your ass off on top of a glacial moraine.”

In my mug: White tea with honeysuckle and…honey. 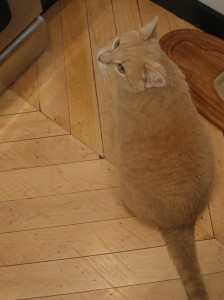 Keeping me company: Mr. Ramses is not so much keeping me company as begging constantly for food.  He seems to be of the opinion that colder weather = development of a Jabba-like exterior layer of fat.  Fortunately for Ramses (and unfortunately for me), he is an expert, extremely annoying, relentless beggar.  Jabba-the-cat, here we come.

Out the window:  Brooklyn is currently clear, cold, and sunny.  Passersby on the sidewalk are hunched into their coats.  Snow is in the forecast for later today, with the weatherman calling for everyone’s favorite, a “wintery-mix” (read: ice slushie).  Good times.

On the iTunes: to keep my heart warm on such a brittle, cold day, I’m listening to Afro-Cuban jazz and remembering the feel of sunshine on my face and wine in my glass from last week’s vacation to the Napa Valley.  It’s working surprisingly well.

A little procrastination never hurt anyone:  First up: an interesting podcast from Writing Excuses on how to turn protagonists into antagonists (or just add a little twist of the dark side to your good guys).  Second: a link I’ve found very useful lately — a slightly older post from Rachel Aaron’s blog in which she lays out her process for plotting a novel.  It’s very pragmatic and detailed and nuts-and-bolts.  Finally, for those of you interested in my aforementioned trip to Napa, or those of you considering making such a journey yourselves, I’ve blogged a wine country travelogue (with reviews of restaurants, wineries, etc.) over on the food blog I contribute to, Between Courses.  Check it out.

Alrighty!  That’s it for me today.  I’m off to get my characters into more trouble (up next: a run-in with an Ice Age giant bear.  Fun!).  What are YOU doing today?

Apologies, folks, for my prolonged absence.  I submit for your consideration several possible reasons for the Great Silence here on Comedy or Tragedy.  Please do pick your favorite (which may, or may not, be the most likely), or propose your own explanation:

Or, maybe the real reason is this.

Now that I’m back, I can say that my absence was rejuvenating.  I’ve got lots of fresh ideas battering round in my head, ready to break out onto the page, as well as a new determination to hammer out the second half of the revisions to ABSENT.

I also intend to keep the blog updated, which should be much easier this semester than last.  Both of my classes this go-round are old preps, so I should have a lot more time to devote to my writing and writing-related activities.  Look for a new installment of Writer’s Workspace later this week.

I’ve missed you all, and it’s good to be back!